RNLI crews from Dart and Salcombe featured in TV documentary 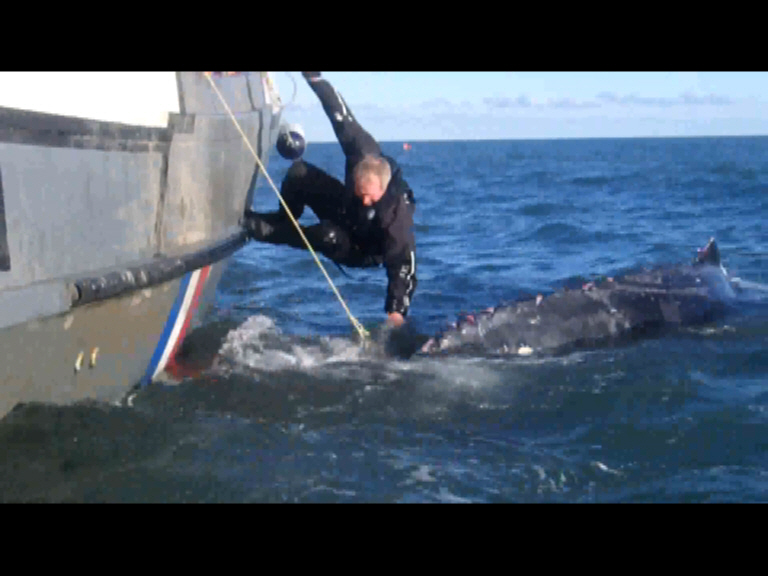 Photo: Yorkie Lomas RNLI
The humpback whale before it was cut free

The volunteer lifeboat crew of Dart and Salcombe RNLI were on TV screens as they featured in the 5th episode of the BBC TV series Saving Lives at Sea, which showcased the lifesaving work of the Royal National Lifeboat Institution.

The 12-part documentary series was shown on BBC Two on Wednesdays at 8pm and featured real rescues carried out by the charity’s lifeboat crews and lifeguards around the UK and Ireland, including the release of the humpbacked whale off Blackpool Sands in which the Dart and Salcombe lifeboats were involved.

From the remote and rugged coastline of Aith in the Shetlands, to the packed sands of Woolacombe in Devon, the series gave a unique insight into the lives and work of the charity’s volunteer lifeboat crew members and lifeguards, who rescue thousands of people and save hundreds of lives around our coastline and on the River Thames every year.
Following the success of the four-part first series, which was broadcast last year, this series featured more episodes and more real-life rescue footage, accompanied by heart-warming and emotive testimonials from the crew, lifeguards and the people they rescued.

The series has been filmed over the past year, with lifeboat crews and lifeguards carrying special cameras and welcoming film-makers into their day-to-day life. Rescues from the RNLI’s archives are also revisited.

Last year alone, RNLI lifeboat crews around the UK and Ireland rescued 8,643 people, saving 431 lives, while the charity’s lifeguards responded to 17,414 incidents and saved 127 lives on some of the UK’s busiest beaches.

Saving Lives at Sea was broadcast weekly from Wednesday 16 August to Wednesday 1 November on BBC Two at 8pm. The series is made for the BBC by Blast! Films.

The two rescues of the humpback whale 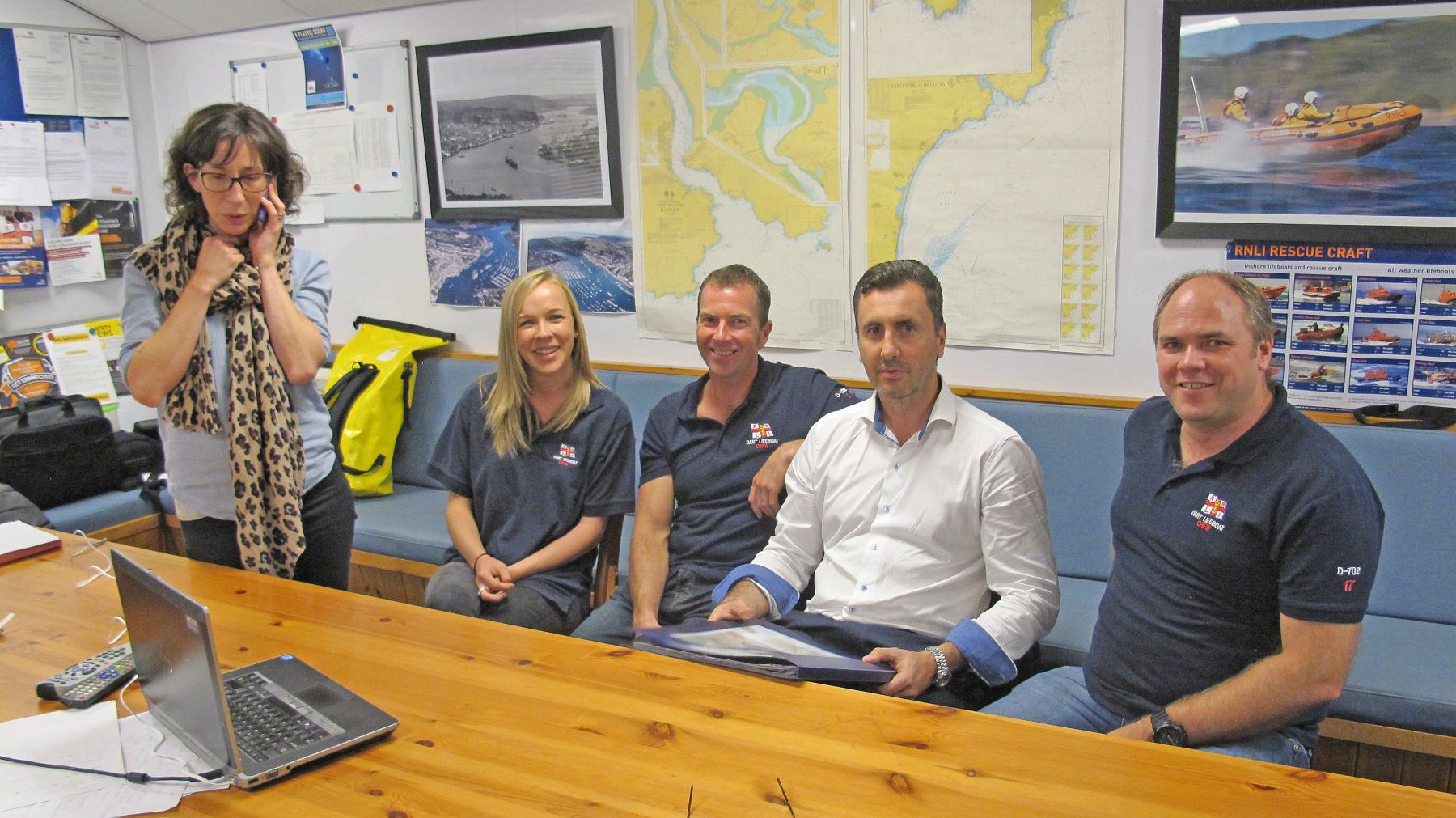 In March this year a 20ft. humpback whale, more commonly seen off the coast of New England, followed the herring shoals and came in close to the South Devon shore. She continued feeding for over two weeks but became tangled in whelk pot lines a quarter of a mile off Blackpool Sands on two separate occasions.

Two divers from the British Divers Marine Life Rescue organisation came to the beach and the RNLI Dart D class lifeboat and the RNLI Salcombe Tamar class lifeboat launched to assist them in releasing the whale. Dart lifeboat crewmen, Yorkie Lomas and Mark Conroy, filmed the incidents in HD using a waterproof Pentax camera, usually used for still photographs. These were edited to make the videos which can be seen on Launches 281 and 284 on the www.dartlifeboat.org.uk web site. The entire footage was then given to Blast Films! to make the feature in Episode 5 of the current BBC2 series ‘Saving Lives at Sea’ showing the whale’s rescues. The whole RNLI Dart Operations team gathered in the lifeboat station to watch the episode on TV and this was followed by a live interview on Facebook with the crews involved. Two RNLI Press officers from Poole and Saltash fielded the questions as they came in.

(For more details of the Question and answer session please use the link to the article in the October issue of By the Dart. It is hoped to provide a link to the continuing Dart D’Tales articles published in By the Dart on this site)

Mark Cooper, our Dartmouth Harbour Master, has asked me to circulate the news that a Portuguese Man o’ War has been sighted in the river. A purple float, shaped a little like a Cornish pasty, is visible on the water’s surface whilst blue, tentacle-like ‘fishing polyps’ hang below; these can be tens of metres in length. It’s the tentacle-like polyps that can give an agonising and potentially lethal sting, Because a stranded Portuguese Man o’ war looks a bit like a deflating purple balloon with blue ribbons attached, children will find it fascinating. So, if you’re visiting west coast beaches in the next few weeks it’s well worth making sure you know what these animals look like and that no one picks them up. The stings can be unbelievably painful and, in rare cases, fatal. 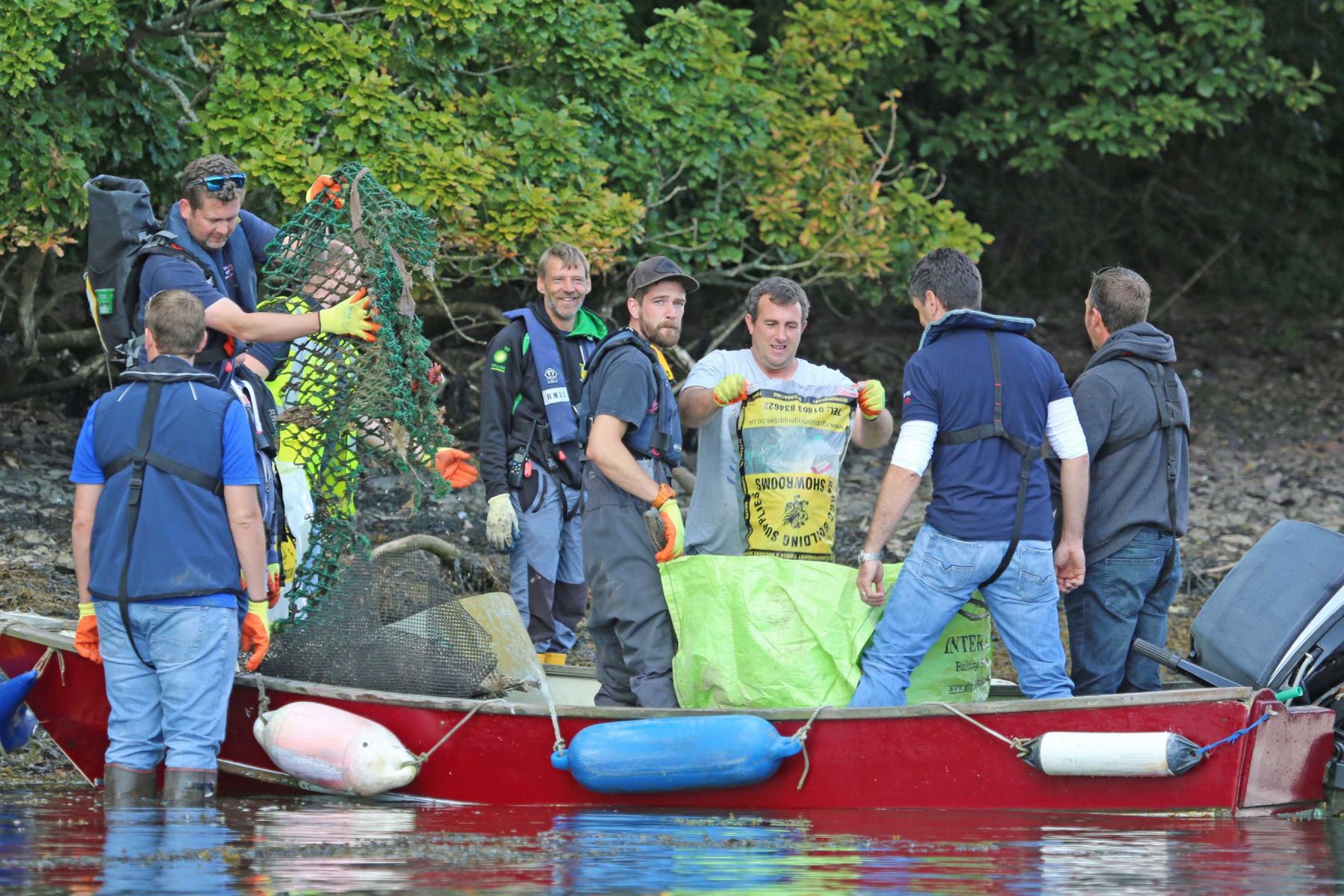 The River Clean Up was a great success and fun at the same time. The volunteers from the lifeboat teams, the Coastguards, Harbour Authority staff and the Dartmouth Midi Skip family lined up before getting their feet wet. In fact the Coastguards managed to arrange for their pagers to go off before any of them had stepped on a boat! They were called to an “unexploded bomb” that one of our lifeboat crew had dug up the day before. News travels slowly from Stoke Fleming! (And it wasn’t a bomb) 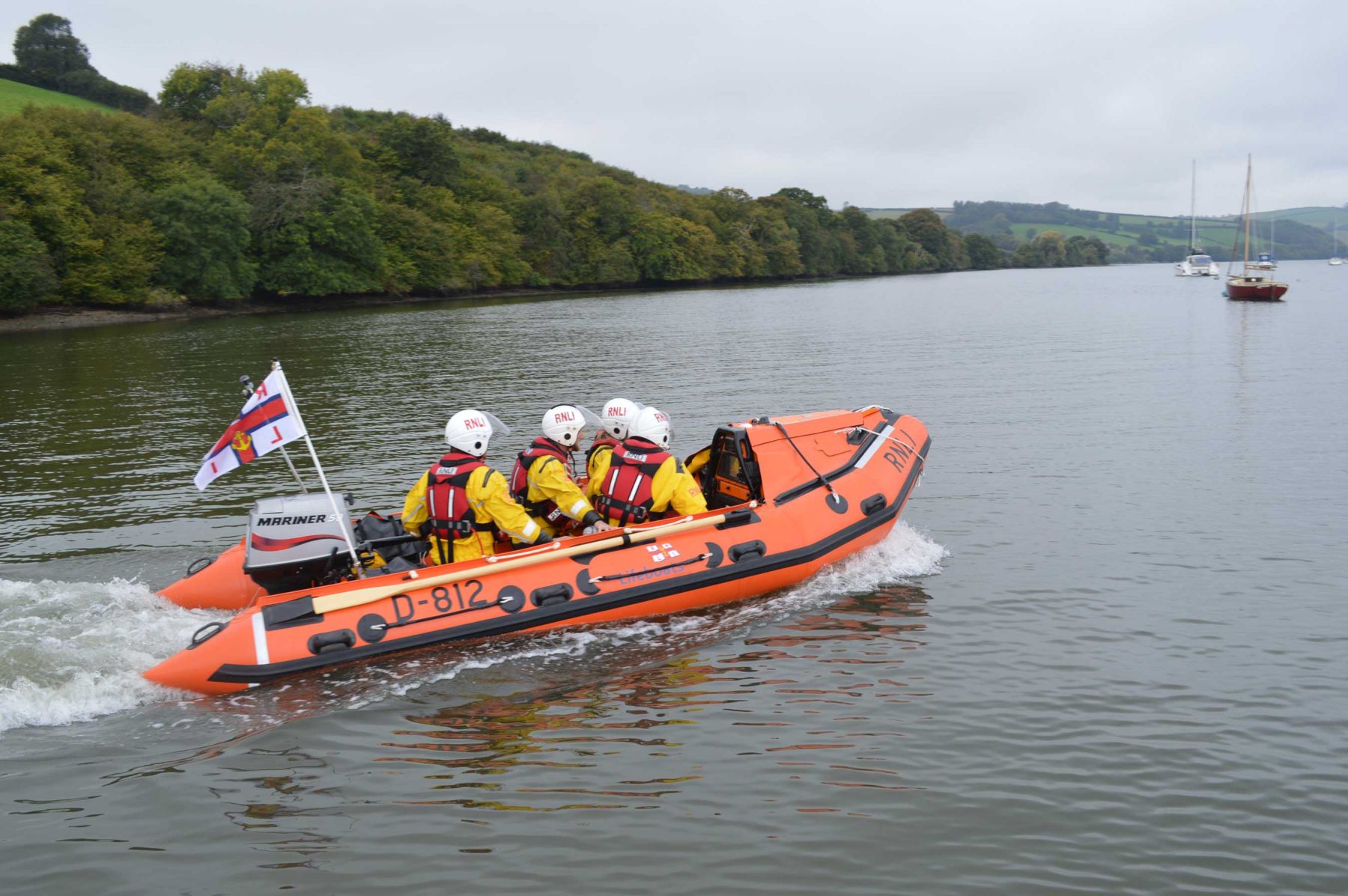 Our boat, D702, has currently been replaced by the brand new D812 from the Relief Fleet at Poole while this servicing takes place. She had 10 minutes on the clock when she arrived so her very first call out resulted in what is probably a Life Saved. We will be receiving our own replacement D class, D838, in May 2019.