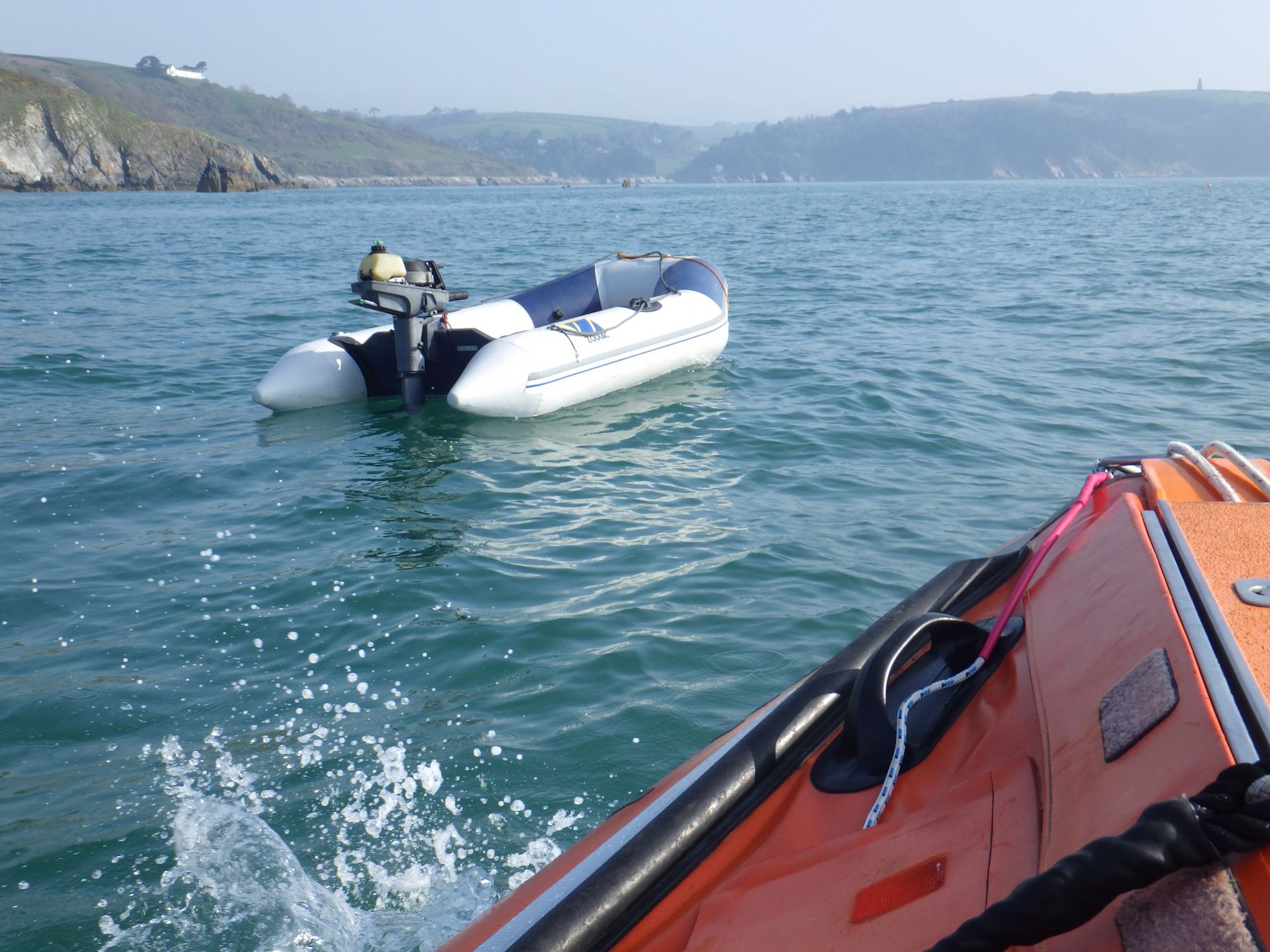 Four shouts, a free lifejacket clinic and over six hours training on the water kept the Dart volunteers occupied.

The pagers first sounded just before 9am on Saturday 14 April as the Operations and Community Lifesaving teams were gathering at the lifeboat station for the annual free lifejacket check.
A 3 metre tender had been found floating south west of the Dart estuary with the engine in the down position and the cover off. It was assessed as a possible ‘man overboard’ situation. The D class inshore lifeboat crew working with the Dartmouth Coastguard SAR team searched the sea and coastline for an hour before the owner of a yacht was found as he was about to sail from Dartmouth. It was presumed that his tender had been deliberately set adrift overnight.

At the lifeboat station the team from Ocean Safety in Plymouth carried out checks on 124 lifejackets and only had to reject three. The figure has dropped over the last seven years when initially over a third were found to be unfit for use.

The exciting news had been released the day before that the RNLI Trustees had authorised a two year trial of a B class lifeboat at RNLI Dart. (See previous News Release, dated 13 April 2018) The immediate response of the crew was to use all available training time on the D class so that everyone was fully proficient when the B class arrives for trial later in the year.

The volunteers spent over six and a half hours training on the water over the weekend.
They were only 200 metres away, opposite Noss Marina in Dartmouth harbour, when a Bayliner cabin cruiser developed a broken water pipe and required a salvage pump. The lifeboat crew informed the Coastguard and self-launched to return to the lifeboat station for a pump. When they returned they found the Bayliner had been taken in tow by a vessel from the Dart Harbour Navigation Authority which already had placed a pump on board.

The fourth call of the weekend was to a 35 ft. cabin cruiser with two on board that had put out a Pan pan distress call as it was passing the Mewstone. The crew were training up-river and met the casualty at the visitors pontoon at Darthaven Marina. The lady was given Oxygen and assessed by an RNLI trained Casualty Care crew member. She and her husband were then taken across the river in the lifeboat to an ambulance waiting on the Dartmouth side. After assessment by the ambulance crew the lady was later able to return to her boat.
Full descriptions of these launches can be found on this web site.

New lifeboat to be trialled at Dart Lifeboat Station 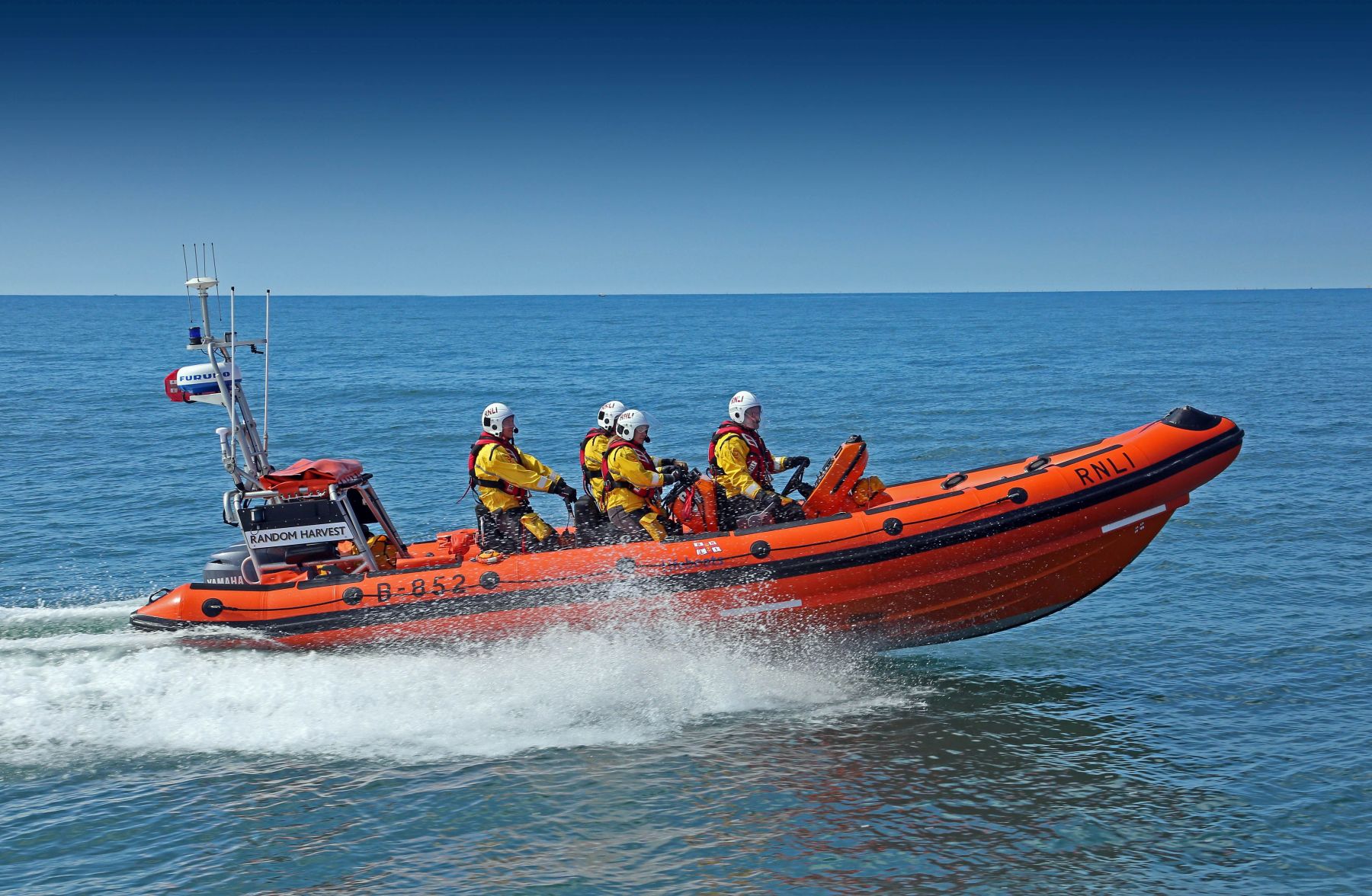 The Royal National Lifeboat Institution (RNLI) has today announced the exciting news that a B class inshore lifeboat will join the fleet at Dartmouth for a two year trial.

Dart lifeboat station currently has a single engined smaller D class inshore lifeboat but following a review at the start of 2017 it has now been decided that the station will receive the larger twin engined lifeboat on trial to test its suitability for the area.

The B class lifeboat is the fastest in our fleet, with a top speed of 35 knots. It’s designed as a very capable fast response craft able to operate in more challenging sea conditions and has a greater night capability than the smaller D class.

Dart’s current D class lifeboat operates, often at night, in very challenging and diverse waters with strong wind and tide conditions. So the addition of the faster and larger B class lifeboat will benefit the station in being able to meet the demand of the rescues they face.

Simon Crayfourd, Area Lifesaving Manager, says: ‘This is an important change for the RNLI in Dart as we continue to improve the lifeboat service around the coast. The capability and standards of our lifeboats are constantly developing and improving; resulting in safer, more advanced lifeboats for our volunteer crews.

‘The review has indicated a potential need for a B class lifeboat stationed at Dartmouth based on the number and type of incidents that the station has responded to over the last five years. The current lifeboat is sometimes operating close to the limit of its capability so the larger lifeboat increases the effectiveness of our response to a casualty.’

The review considered the number and types of rescues carried out by each lifeboat, changing trends and water use within the area, search and rescue demands, costs, as well as future needs. As part of this review, both Dart and neighbouring Torbay and Salcombe lifeboat stations were involved in feeding into the review to help build an all-round picture for consideration.

The trial will start later this year, with a review taking place after two years looking at the success of the trial and whether a B class will be placed permanently at Dart lifeboat station.