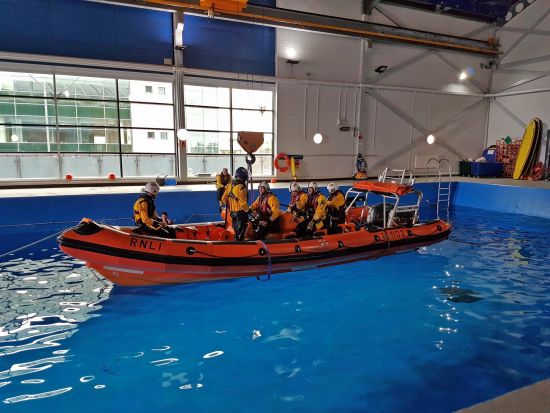 Photo: RNLI
An Atlantic 85 lifeboat about to be capsized in the Sea Survival Pool

Operations.
The early part of the boating season was very busy; on 30 June there were three call outs in the space of five hours. The latest shout was to assist a yachtsman lying off Blackpool Sands with a fouled anchor. Details of all launches appear on the new station web site fairly soon after the event. Videos take longer to edit and at present the helmet camera is not functioning. Last year we used the Pentax waterproof camera to film the Whale rescues so we have reverted to using that. We hope that Blast Films will use two or three of our recues for the next series of “Saving lives at sea” on the BBC this autumn.

The lifeboat crew are now using every available minute to get everyone up to “competency” level on the D class before training starts in earnest on the B class lifeboat from 9 September. It is hoped to have enough crew trained up for the Atlantic 75 to become operational at the end of October. There will be two training sessions every week-night and by day on Sundays. Dart D’Tales now exists in a two page format in By the Dart. The August edition has an article on how training for the B class has already begun and Tom Shanley was filmed in a B class capsize drill in the Sea Survival Pool at the RNLI College. The video of this is on our web site.

The annual RNLI Dart Fete will be on Saturday 28 July in the Royal Avenue Gardens from 10am to 3pm.
Help is still needed; we can always sell cake! Whole cakes or similar can be sold on the cake stall and sliced cake can be used by Lynn Clements and her team in the Tea hut. Please bring them on the day.
Bottles are needed for the Tombola. They need not all be alcohol and everything is welcome. Rob and his team will be labelling them at 6pm on Friday at the lifeboat station. Bottles are best brought just before they start or, if you have time after reading this, to the crew meeting just before 6pm this Tues. evening. Bottles can also be left at the Visitor centre before 4pm this Friday.

The RNLI Visitor Centre.
After a quiet start to the season figures are up. Sales are 13.5% higher than at this stage last year and donations are only a little behind that. The volunteers are all working very hard and all the slots in July were filled, but there is still room for others to join the team. We have been asked to attend several outside events but this has not been possible – a few more on the rota would ease the pressure and enable us to do more. There will shortly be a new photographic presentation highlighting the activities of RNLI Dart over the last 10 years.

Regatta.
There will be two RNLI demonstrations. The first will be at 6pm on Friday 31 August and the Dart D class will be working with the Salcombe Atlantic 85. The Atlantic 85 was named in Salcombe in May this year, which is why their smaller Atlantic 75 became available for our trial. On Saturday 1 Sept. at 1pm Dart lifeboat will be operating with Salcombe’s Tamar class all weather lifeboat. The best place to see all this will be on the South Embankment in front of the Harbour Offices. 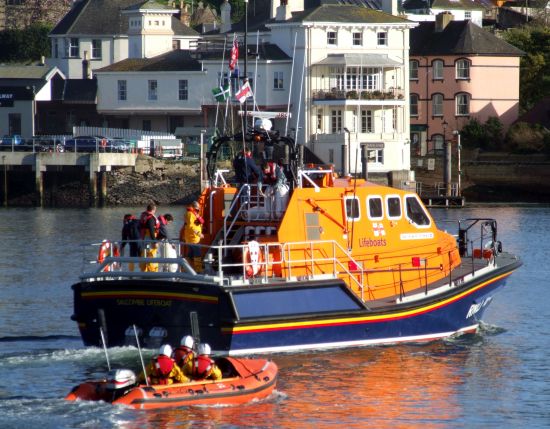 The Dart Operations team raised £1,200 with a Rowathon. 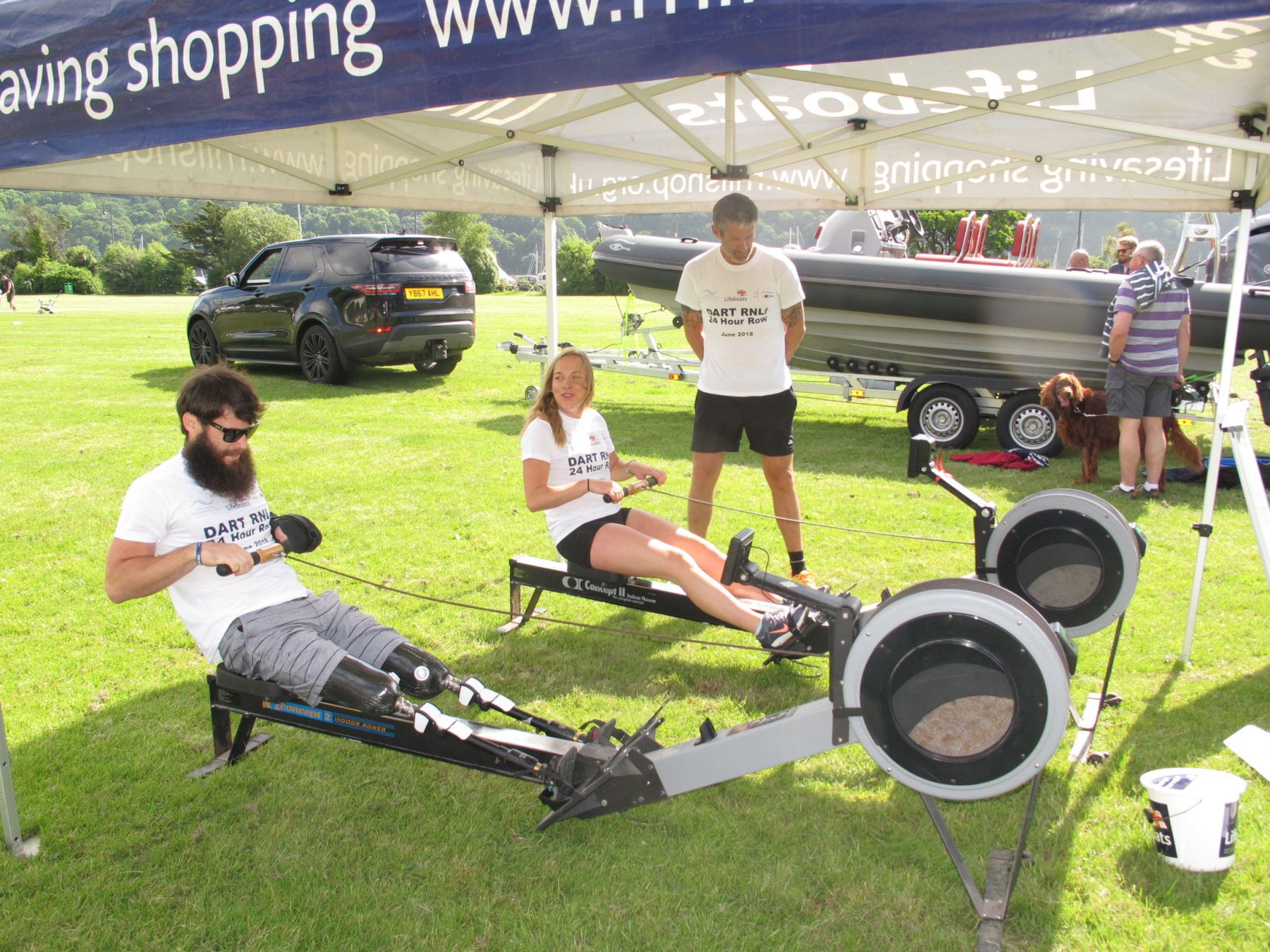 The 24 hour event in June was opened by local man, Cayle Royce MBE. He had rowed the Atlantic three times for Service charities since being severely wounded in Afghanistan.
Cayle found the rowing machines used for the event quite difficult. For his most recent Atlantic row, as Captain of the Row2Recovery team, he left his legs ashore and was velcroed into his non-sliding seat. The team took 46 days to cover the crossing and the four ex-servicemen had only three non-artificial legs between them.

Yorkie Lomas, a member of the RNLI Dart lifeboat crew taking part in the Rowathon and currently captain of the Dartmouth Amateur Rowing Club, took 36 days for his Atlantic crossing. He rowed with three others from Dartmouth from La Gomera in the Canaries to Barbados; a record which stood for a considerable time.

Crispin Brabner, also on the Dart lifeboat crew, has recently completed this year’s extremely hot London marathon in 3 hours 34 minutes but took only 2 hours 55 minutes to cover the distance on the Rowing machine during the Rowathon.
The event was arranged by lifeboat crew member Katy Locke who is also Events Chairman in the Dartmouth Fundraising Branch. The crew collected individual sponsorship for their efforts. Donations were made to the Charity by the local boat building firm RibEye as well as the Dartmouth Chiropractic Clinic. Special guest DJ, Rich Baker, also contributed and covered the 24 hour event, with a little help from his friends, and did much to keep spirits up through the long hours of the night.

The Dartmouth Branch usually raises enough to cover the annual running expenses of the busy station which currently operates a D class inshore lifeboat. The crew are only too aware that fundraising activities will have to rise considerably when the ex-Salcombe Atlantic 75 lifeboat comes to the Dart this autumn to join the D class for a trial period of two years. 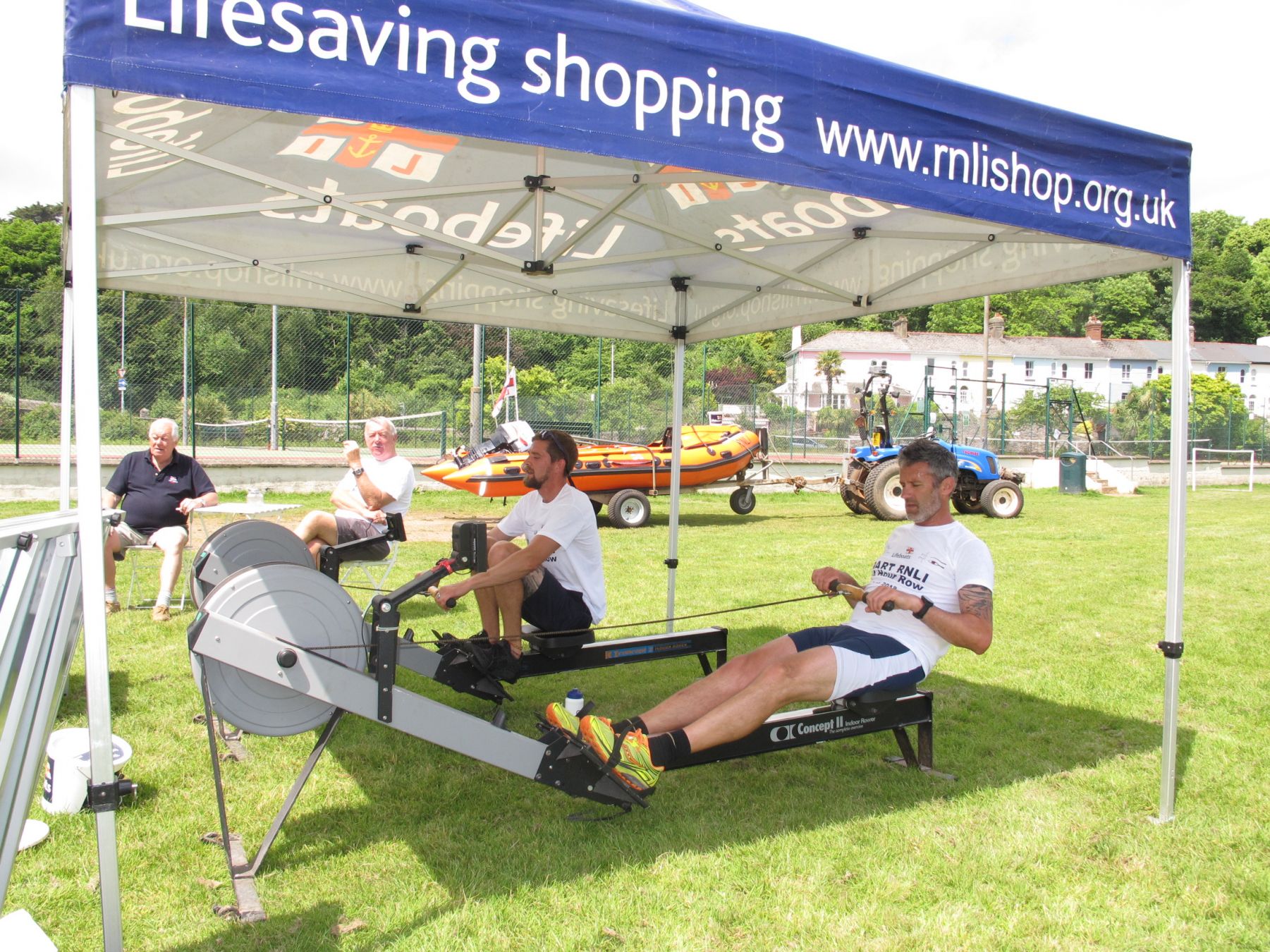