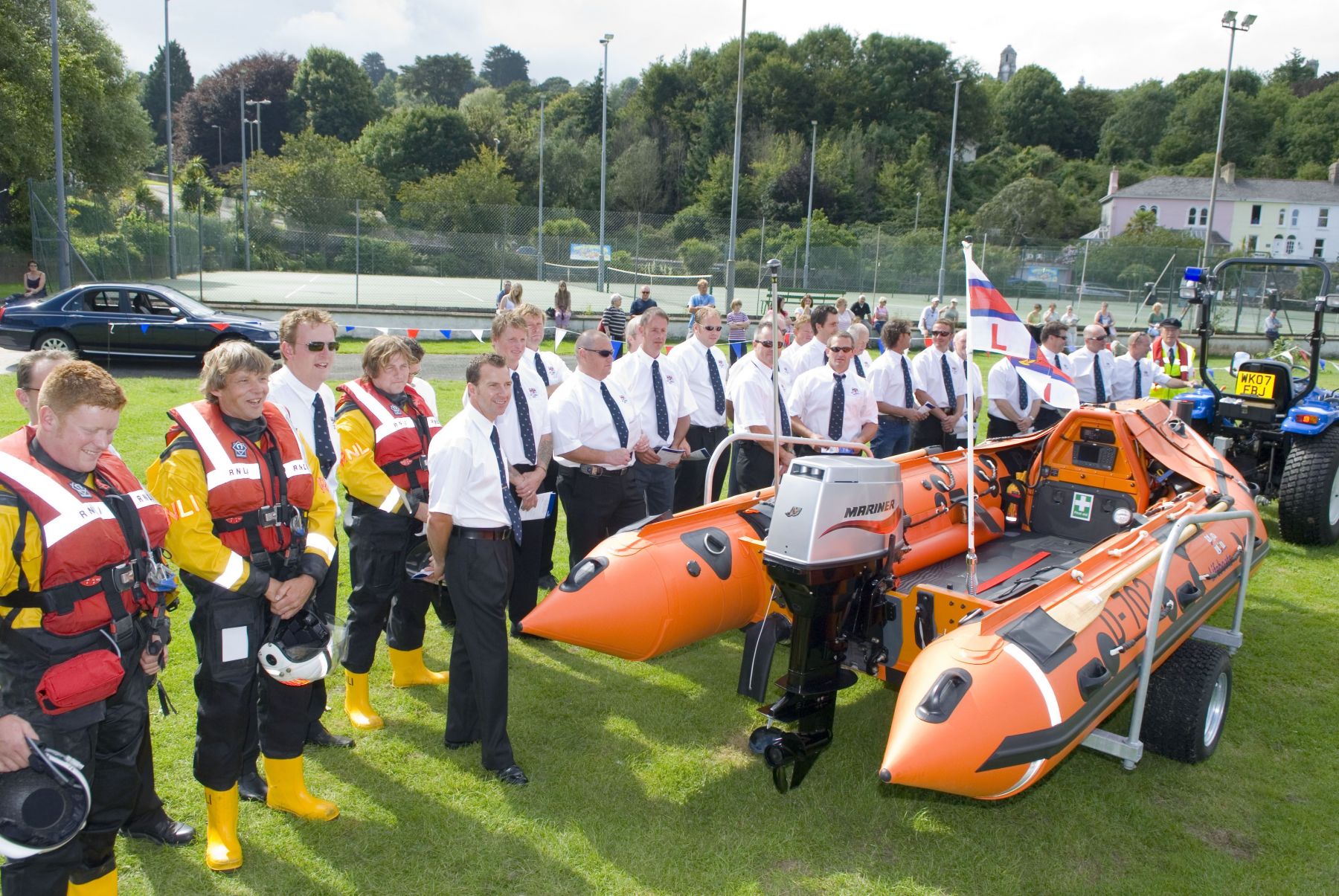 Operations report
The trial of the Atlantic B class lifeboat in Dartmouth started in October 2018. The station has received a very positive letter from the RNLI concerning the Atlantic operations and training to date. Rob Clements said, “An enormous amount of work has been undertaken. Procedures will be reviewed every six months”. There is still Atlantic night time training to be completed by a few people. The Atlantic had five shouts in 2018. The first was to Start Point to a boat with a rope round its propeller. It took the Atlantic 14 minutes to get out there. Over the 22nd and 23rd December both boats, the Torbay all weather lifeboat, four shore teams and the coastguard helicopter were involved in a search for a missing local man. After his body was finally recovered the RNLI trauma team attended the station to support the crew.

Over the New Year period there were gale force 9 winds in the harbour and it was uncertain whether the Atlantic would have to be moved from her berth on the Aquadock alongside the low water landing to a more sheltered position in a Marina. In the event she safely rode out the storm in her usual position.

The station had 46 shouts in 2018, so it was our second busiest year. There have been seven launches so far this year. On the first of February the Atlantic lifeboat was launched to assist a 63tonne 75ft. yacht that had lost its steering just after they had lowered their sails and were motoring in past the Castle Ledge buoy. In the event the five man crew managed to set up a jury steering rig just after the lifeboat reached them. The volunteers escorted the huge yacht to a berth alongside the Town pontoon.

Area Lifesaving Managers (ALMs)
Simon Crayfourd is a paid member of the RNLI staff and is based in Kingsbridge. As an Area Lifesaving Manager he has overall responsibility for Dart lifeboat station and is the manager for Mark Strudwick, our volunteer Lifeboat Operations Manager.
The new lifesaving delivery areas are now in place: Last summer, the RNLI reviewed and identified some areas where the lifesaving area boundaries were not quite right. As a result some changes have been made to ensure the RNLI’s Area Lifesaving Managers (ALMs) are best placed to provide the most effective support. There are now 47 areas instead of 41, each with a dedicated ALM.
It was recognised that many of our activities, such as training and cover for our lifeboats, depend on a close working relationship with the Torbay lifeboat station. For this reason Simon has now been given the responsibility to add the management of Torbay Lifeboat Station to those he already covers, i.e. Dart, Salcombe and Plymouth.

Fundraising and replacing The Spirit of the Dart
The RNLI Dart Fundraising team, under the chairmanship of Bob Gilbert, are due for a busy summer. D class inshore lifeboats are usually replaced after around 10 years of active service. The Spirit of the Dart, D 702, donated by Mike Felton and Caterfood, went into active service on 2 August 2008 and has been launched on active service 351 times up to 31 January 2019 and saved 11 lives.
The generous couple funding the new replacement D class at Dart are doing so in memory of her late aunt. They are particularly delighted to be able to support the Dart station as they used to live in Dartmouth. Their commitment to the station also extends to funding the crew kit and training, which is wonderful.

The donors have planned to visit the Isle of Wight to see their boat, D 838, in production. This has been scheduled to take place at the end of May. She will have her sea trials in the second week of June and then be delivered by road to the Dart lifeboat station.
Her Naming Ceremony on Coronation Park on Sunday 4th August will be the highlight of RNLI Dart Lifeboat week which runs from 1st to 8th of August. The donors will hand over the boat to a senior representative of the RNLI who will then present her to RNLI Dart. The boat will then be named Dudley Jane by the Donors, blessed by the RNLI Dart Chaplain and launched. The BRNC RN Volunteer Band will also be playing.

Other events in Lifeboat week to note are the annual RNLI Flag day on Thursday 1 August and the Fete which will be held in the Royal Avenue Gardens on Monday 5 August. On Saturday 3 Aug there will be a raft race at 3pm from the Higher Ferry to the Boat Float. The rafts will be built on Coronation Park and the race will be a trial run for the big event in Dartmouth Regatta.

If you can help in any way with respect to the Flag Day and Fete or would consider becoming part of the RNLI Dart fundraising team, please contact Bob Gilbert on his mobile 07721 780235.

Deputy Launch Authorities
If you are under 65, live within 20 minutes of the lifeboat station and have a good knowledge of the local waters, there is a vacancy for an additional Deputy Launch Authority to join the team. Please contact Mark Strudwick, Lifeboat Operations Manager, to find out more.
All contact details can be found on the local station website www.dartlifeboat.org.uk There is also a link to past issues of Dart D’Tales, including the August 2015 issue which has a full article on building lifeboats, both D and B classes, at the RNLI Inshore Lifeboat Centre.